The Story of Majorelle Gardens & Top Tips for Visiting

Dramatic cacti and a backdrop of cobalt, yellow and mint make the Majorelle Gardens Insta-fabulous.

But they’re not just about picture perfect moments. The story of Majorelle encapsulates the creative history of Marrakech – and its place as a hub for some of the twentieth century’s most famous creatives.

Jacques Majorelle moved permanently to Marrakech in 1919 after being entranced by the colours and light of Morocco.

Four years later, he bought a plot of land and started creating the gardens that would one day become world famous.

After building a villa and studio on the land, Majorelle bought plants from all over the world. Cacti, bamboo, bougainvillea, banana trees and coconut palms jostled for space with jasmine, water lilies and giant agaves. Water, which is sacred in Islam, was also central to the design and Majorelle created basins and pools connected by meandering paths.

Keen to capture the colour he’d seen in Marrakech, he also created his own ‘Majorelle blue’ and used it – along with other striking colours – on oversized pots and walls as a backdrop to the dense green foliage.

The gardens however were costly to run and Majorelle opened them to the public in 1947. But after his divorce in 1956, he started selling off parts of the land and when he died in 1962, the gardens fell into disrepair.

Just like Majorelle, Saint Laurent was drawn to the light and beauty of Morocco and when he and partner Pierre Berger heard the Majorelle Gardens were under threat of development, they bought the land – keen to protect the legacy of the city they loved.

Berger later said: “When we arrived in Marrakech, Yves and I were utterly seduced by the beauty and the magic. What we did not expect was that we would fall in love with a small, mysterious garden, painted in the colours of Henri Matisse and secluded in a bamboo forest, all silence, deeply sheltered from noise and wind. This was the Majorelle Garden. Years later, quite by chance, we came into possession of this jewel and set about saving it.”

After buying the gardens in 1980, the couple set about restoring them – as well as Majorelle’s house. Villa Oasis became a sanctuary that Saint Laurent loved, a kaleidoscope of colour and pattern that became the private heart of Majorelle the public never saw.

Meanwhile, the garden was restored and Majorelle’s studio turned into a Berber museum. Over the years, a cafe, shop and library have been added and in 2017 the Yves Saint Laurent Museum in Marrakech was opened a few hundred metres from Majorelle.

Together they are a must-see for anyone interested in the rich – and romantic – history of Marrakech. 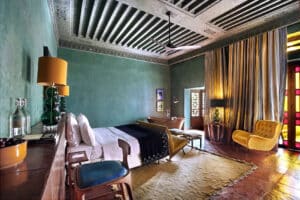